Multitalented Karen Ziemba can do it all—and does, winningly, in Curtains, her latest journey into the world of John Kander and Fred Ebb 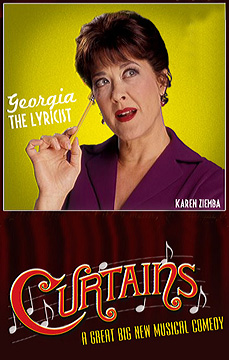 Karen Ziemba may have won a Tony for her performance as a verbally abused spouse in Susan Stroman’s acclaimed dance musical Contact, but it is the work of John Kander and the late Fred Ebb that has tested her mettle as a true triple-threat performer, one who can act, sing and dance with equal authority.
Ziemba, who made her Broadway debut in the original production of A Chorus Line, first came to the attention of the Tony-winning composers in the Off-Broadway revue And the World Goes ’Round, where she earned a Drama Desk Award for a performance that featured wonderful takes on such Kander and Ebb tunes as “A Quiet Thing” and “Arthur in the Afternoon.” In the composing duo’s 1997 musical Steel Pier, Ziemba created the part of Rita Racine, a role that was written for her and one that garnered her first Tony nomination. Ziemba later joined the long-running revival of Chicago as merry murderess Roxie Hart and also took part in a workshop of the long-gestating Kander and Ebb musical The Skin of Our Teeth. “[Their work] is just so eclectic,” Ziemba
says about the composers also responsible for the musicals Cabaret, Woman of the Year, The Rink and Kiss of the Spider Woman. “Things can be bombastic and things can be very broad, but there’s also a lot of stillness and reflection in their [work], too, so it runs the gamut. Plus, they have also written great stuff for dancers.”
Ziemba is currently dancing up a storm on Broadway in Curtains, which features music by Kander, lyrics by Ebb, a book by Rupert Holmes with additional lyrics by Kander and Holmes, all based on the late Peter Stone’s original book and concept. The new musical at the Al Hirschfeld, which opened in March, casts Ziemba as Georgia Hendricks, the lyricist of the showwithin- the-show and one of the possible suspects in the murder mystery investigated by Lieutenant Frank Cioffi (played by David Hyde Pierce). “I think that when I took on the role of Georgia,” Ziemba says, “[Kander and Ebb] created a character that went beyond what they originally thought because of what I do. So that’s part of the reason that I do some dancing in the show.”

“She doesn’t just dance. She acts and then she dances.”

Ebb, unfortunately, did not live to see Curtains reach Broadway, but Ziemba, who exudes a palpable warmth onstage, says, “We still feel he’s around. He’s all over this show because it’s such a showbiz-y show, and he just knew how to write about that inside and out. He had his hand on the pulse of that, and yet there [are] a couple of really romantic things in this, too, that show his very soft and sentimental side, which not too many people saw.” Curtains also reunites Ziemba with fourtime Tony nominee Scott Ellis, who directed the vivacious performer in And the World Goes’Round, Steel Pier and New York City Opera’s 110 in the Shade. About Ziemba, Ellis recently told PLAYBILL, “People always accuse me of this, but I tend to work with a lot of the same people over the years. Why not work with people you love, who are talented? [Karen is] one of those extraordinary people who cannot only sing and act but is also a dancer through an actor—she doesn’t just dance, she acts and then dances. There are not a lot of triple threats out there. She certainly is one of them.”